For their residential trip, year 7 went to Khao Yai national park and stayed in the Wild Lodge. Irina tells us about the many exciting activities each day and how they slept in lodges.

After a long trip by bus, we were relieved to finally arrive. We had a quick briefing about the camp, after which we went to our lodges and settled in before lunch. After lunch, we were divided into three groups in which we would be doing the activities, and in them, we did some games relating to teamwork and collaboration. The groups were ‘Pink Fluffy Unicorns’, ‘Flying Pigs’, and ‘Better Than Flying Pigs’. (‘Better Than Flying Pigs’ waited for ‘Flying Pigs’ to announce their name before naming themselves ‘better than’ them!)

After that, we were allowed to swim, but if anyone did not want to, they could play board games or read. We swam in the groups we’d been in on each of the two buses. Thirty minutes after both groups had a swum, we had our dinner at 18:00. For our entertainment that night, we did three quizzes: a general knowledge one, a sports one and a singing one. Then, before heading off to bed, we were asked to do a summary of our Monday; we would be doing that every evening. 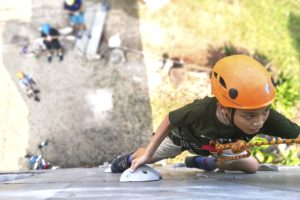 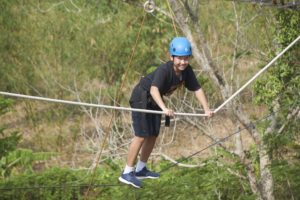 On Tuesday, our first round of activities was introduced. Our groups would take turns doing cookery and the aerial challenge. My group, Flying Pigs, did cooking first. We were separated into smaller groups and cooked two Thai dishes, competing against each other in our groups. Afterwards, we were allowed to stroke the dogs that lay near the house we were doing the cooking in. I liked them.

On the aerial challenge, we had to overcome different obstacles in the air wearing harnesses, such as walking on a rope while leaning one’s hands against another one to balance one’s weight. At the end of each obstacle, we jumped, having to trust our instructor that he will hold us securely. It was a lot of fun, and I challenged myself in many ways. Near the end, Rebecca walked on the obstacle made of wooden boards, with nothing for the hands to hold, blindfolded, after which we headed back.

Every day, after the activity after lunch, we would be allowed to swim until thirty minutes before dinner.

After dinner, we played a game where one person is asked questions by the others, who are pretending to be journalists. The person being questioned does not know what he has done, but the journalists do, and from the questions the person has to figure out what it is.

On Wednesday, we were introduced to a set of new activities that we were going to do after lunch. These included scrambling, climbing and canoeing, and archery. Flying Pigs began with archery, where we received an informative lesson about the parts of a bow. After getting divided into three smaller groups and practising shooting, we got to do a competition with balloons (whoever hits one gets ten points) and then a mini competition with only one shot. We then headed to lunch and after started preparing for scrambling.

We put on a helmet, sunscreen and some insect repellent, then headed off into the national park. We often stopped to talk about the nature we passed, and we saw a lot of interesting things. We found a crab, discussed how vines grew, and the broken dams we encountered while walking along the riverbed. Afterwards, we took a different path to return.

For dinner, we were pleasantly surprised to have spaghetti Bolognese. As our evening entertainment, we split into four groups, and a member of each was told a word, and he had to draw it so that the others would guess. Next, we were blindfolded and had to follow a rope that had ten objects on it, feeling them and guessing what they were. The winning team got a bag of chips each, and the other teams got less according to their place. 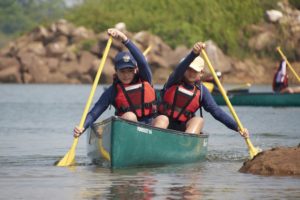 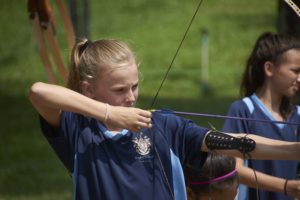 The next day in the morning, Flying Pigs did climbing. We practised on a little structure with four climbing walls before going to the area where we did the aerial challenge. But instead of climbing the rope-ladder to the platform near the top of the cement posts, we climbed the two climbing walls on the structure in which two of the obstacles ended. We tried to beat Simon’s record of 18 seconds going up the easier climbing wall, then we abseiled, the second part of the climbing activity, in which one climbs down instead of up.

We practised on a tree before heading into the structure with the two climbing walls. The objective of abseiling had been to ‘feed’ the rope to the harness, with one’s feet on the wall, so that one would slowly descend with their back to the ground. After one descended to about halfway, they were allowed to jump, pushing off from the wall.

Next, we went to canoeing in our swimsuits. The canoes were for two people, so we had to pair up. We played a game where there were nine levels, each one harder than the last. For the last level, we had to overturn the boat of our instructor! It was very fun, and some of us had fun swimming when they were required to.

After a dinner of kebabs, chicken nuggets, and french fries, we went back to our lodges to prepare to go out to the campfire—we were going to roast marshmallows! We also used that time to pack up, since we were leaving the next day. When we came down to the campfire, the sun had already set, and we could see the stars. I admired the campfire for a while, and looked up to the stars and the brilliant black they were scattered in. I watched the sparks from the fire go out as they slowly ascended into the void of the night. The instructors lit several smaller fires around the main fire in the middle—coals on dying fire whose feebleness was put to use. We had been bringing our torches to every evening entertainment session, but this is the first time we actually needed them. We used them to examine our marshmallows to see whether or not they were properly roasted. This was probably the best night of the camping trip.

The health, safety, and well-being of young people are of paramount importance to all the adults who work at Rugby School Thailand. Children have the right to protection, regardless of age, gender, race, culture, sexual orientation, or disability. They have a right to be safe in our school. Members of staff in the school have a legal and moral obligation to safeguard and promote the welfare of the pupils, taking all reasonable steps to protect them from harm whether from physical injury, abuse, neglect, emotional harm, or from anything that interferes with their general development.

The health, safety, and well-being of young people are of paramount importance to all the adults who work at Rugby School Thailand. Children have the right to protection, regardless of age, gender, race, culture, sexual orientation, or disability. They have a right to be safe in our school. Members of staff in the school have a legal and moral obligation to safeguard and promote the welfare of the pupils, taking all reasonable steps to protect them from harm whether from physical injury, abuse, neglect, emotional harm, or from anything that interferes with their general development.